In stock, ready to dispatch.
Twelve pack of Cobra AM845 Walkie Talkies with up to 10km range.
Skip to the end of the images gallery 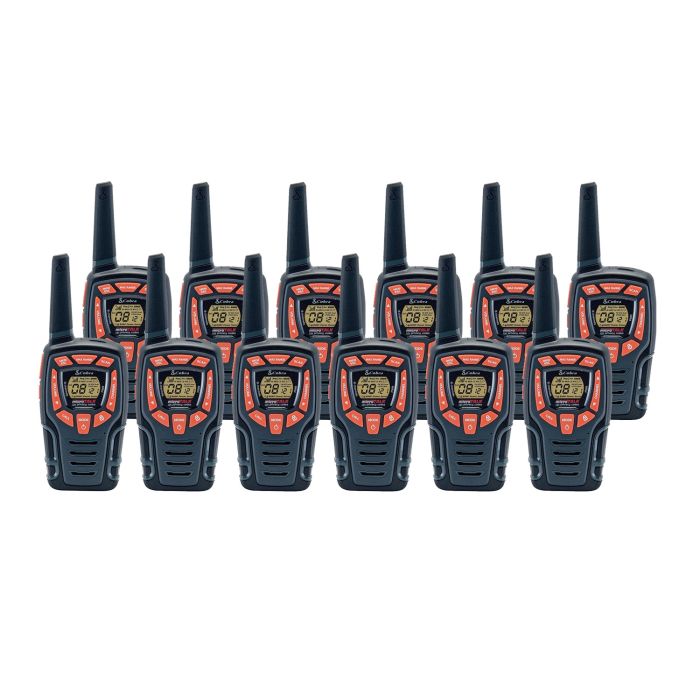 Be the first to review this product

The All new 10-Kilometre Walkie Talkie from Cobra. Complete with rubberized grips to provide enhanced grip and built-in LED Flashlight to keep you on the go. VibrAlert® notifies you of incoming transmissions by vibrating. The waterproof spec allows you to be ready, whatever the weather. Voice-activated transmission keeps your hands for other tasks. Up to 968 channel combinations are available when the 8 channels are combined with the 121 privacy codes.

Where can I use my PMR radio?

Whether you are in the garden or at the campsite, you'll be able to keep in touch with the Cobra AM845 Walkie Talkies. These PMR 446 two-way radios use the 446MHz frequency band for communication between the two handsets so are compatible with all other PMR 446 radios in range. These are powerful units with no need for call plans or licences, making them the ideal alternative to mobile phones for wireless communication.

You can secure these compact PMRs with the belt clip situated on the back of each radio. To cut down the ambient noise or conduct more covert conversations, the AM845 units can be attached to a compatible headset. The Cobra AM845 Walkie Talkies are made to be used in challenging environments with harsh weather conditions. With their waterproof design, these PMR radios are well equipped to handle the Great British weather. The VibrAlert feature makes working in loud and busy environments easier, as enhanced vibrating feedback notifies you of incoming transmissions. The built-in LED flashlight on each headset is very useful for when working during the night or in dark places where you need to find your way.

Will these radios be effective in closed conditions?

These two-way radios reach their maximum 10km range in open conditions. However, they are also effective even if there are obstacles, such as doors and walls, between the transmission ranges. Roger beeps can be used to give confirmation to the person on the other end that it's clear to talk. The Cobra AM845 can be connected with a range of headsets and earpieces for more covert communications or to cut down on background noise.

How many frequencies do these two-way radios have?

You'll never struggle for a clear frequency, as each unit has eight channels which have 121 privacy codes for a total of 968 privacy combinations. The Cobra AM845 comes with voice activated transmission (VOX) for hands free transmission. Using key lock, you won't need to worry about accidentally changing your channel and missing a message.

How do I charge my radios?

Recharge your Cobra PMR radios with the included Micro-USB cable. The radios come with a Y cable so both units can be charged from one socket at the same time. If you are at a festival with no access to mains power, just replace the re-chargeable batteries with alkaline AAA batteries (not included). The power saver circuitry feature extends battery life when you are not transmitting or receiving. The battery level indication on the PMR's display screen will show you when you need to recharge or change the batteries, so you will never get caught without power. The AM845 can last up to four hours of continuous talk-time on a full charge and up to 24 hours on standby.