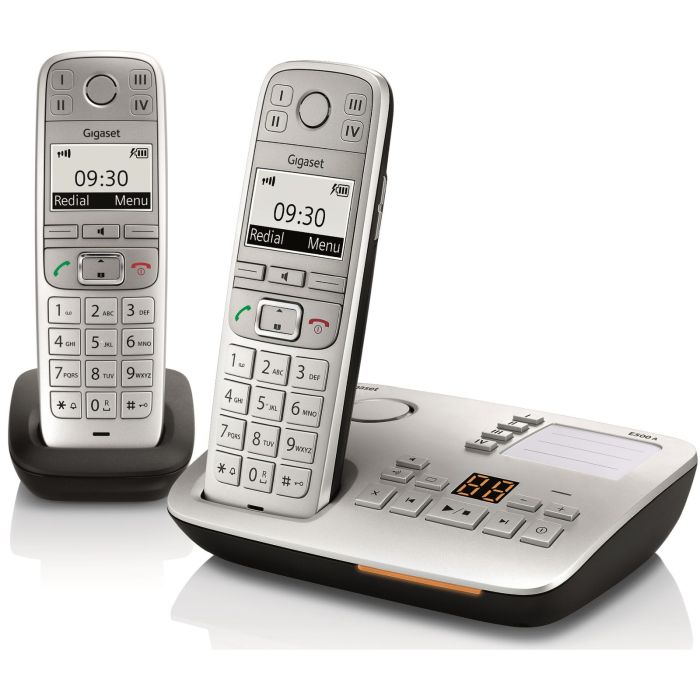 The Gigaset E500A is a stylish alternative for those looking for a duo set of cordless phones with bigger buttons and louder volume. Built to the highest standard, the E500A offers reliable performance and benefits from a specially designed illuminated keypad with reasonably separated keys and a brilliantly clear 1.9” display. Further benefitting from an integrated answering machine for up to 25 minutes of messages, and an array of other useful DECT features, the E500A is an ideal set of landline phones for those entering the twilight of their lives.

The E500A benefits from being hearing aid compatible, and features Gigaset’s pioneering HSP technology, which enhances the clarity of calls above that of a standard landline by eliminating distortions in sound; and a convenient loudspeaker can give a boost to the volume at the touch of a button for comfortable hands-free conversations, or to allow others in the room to participate. In addition, the E500A boasts a dependable range of up to 50 metres indoors (up to 300 outdoors) to ensure there is no deterioration in sound quality even when further from the base.

The integrated answering machine on the base of the E500A has been designed for users convenience. The handy LED message counter displays the number of messages that have been recorded, and playback is made easy thanks to large control buttons and excellent loudspeaker (which can also be used for making and receiving calls). Additionally, the base station features a visual call light that will illuminate when there is an incoming call for an additional indication that someone is trying to reach you.

Additional security for peace of mind

Another advantage of the E500A is an SOS function, which can be activated from the base or a handset at the touch of a button in the event of an emergency. You can programme up to four emergency contacts, and if the first called party does not answer within 60 seconds then the E500A will automatically dial the next number. Ideal for both the user and their loved ones peace of mind.